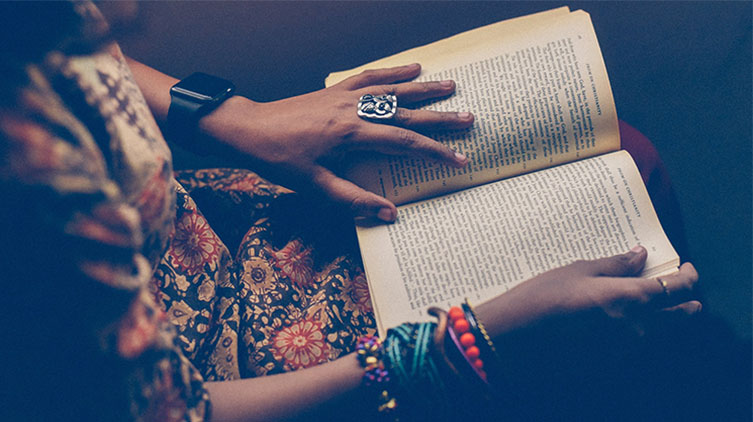 Books are Magical – leave not the words that inscribe the meaning of life!

Persistent with my optimism, my happiness holds no bound to see “Tomb of Sand” by Geetanjali Shree win the Booker Prize 2022. It was a preference elucidated with a clause “what if” – it’s a winner or not, neverthelessit taught that every beginning has an end plausibly structured to give meaning to our existence.

I am no soothsayer or a harridan who out of her desperate bemuses picks a clock to suit the fancies of her timeline. The “Tomb of Sand” is a favourite not because it is written by an Indian author—prejudices have no role to be pick-nits in the overwhelming insights of the reader; it’s the experiences of the author whose divergence through life is a cemented concrete of introspection and deliberations that magnifies a book. The books eloquently put reflections of the past in the present to reconstruct a future—a plot so beautifully captured through characters who exhibit their existence sprouting right from the capricious legitimacy of life.

Amma in “Tombs of Sand” is a perfect mother, grandmother and wife but carries shoddy remnants of the past as a perfunctory to the existence of her conscious.  To deliberate or extrapolate is a benign pestering of the mind which come as whispers and leave Amma with the inescapable decision to open the buried sheaths of inquisitor. Amma transpired that life is made of folds slaying one emotion to the other, to finally meet in the end.

In retrospect, the Booker Prize winner of “The Promise” in 2021, “Shuggie Bain” in 2020 and “The Testaments” in 2019 too discretely talk about the vicissitudes of life and a contemporaneous need to fight the odds to define our existence in the world. Are we mavericks to talk about emotions like “dignity”, “sanctity”, “honesty” and “righteousness”? Yes, seems so as the world grapples to find reasons to ensconce them tightly in rigid compartments of non-familiarity.  Whether it’s “Amor” who furtively choses a righteous path to keep the promise by her mother or the tyrannical and whimsical whiff to subjugate women in “The Testament”, because for her to lose her dignityis not a matter of choice but a patriarchal valley of subsidized emotions.

Are all these stories a validation of poignancy the life entrenches in its womb?

Isn’t it a reality which we fail to embrace due to deleterious mahogany of its crudeness to disarm us?

Books eloquently put hard-boiled lumps in the otherwise finely coarse dish, not to stagger us but to infuse in us the sensitivity and compassion to understand different expressions of life. A book in hand is like a piquant taste of tamarind – the more it is ripe, the sweeter it is but does not leave the sour palette knocking off the synapses of the brain. It makes the characters speak a language that we have whispered to ourselves many times; creates a belonging to cherished moments which could have been ours, a touch of humour brings on the flatbread smile which usually dresses as a smirk now and a love desperate to touch the bare loneliness which our mind disregards as bouts of intemperate visions. Nevertheless, books open a grand view of life.

Today, the ambush of online media is intrepid enough to overwhelm our minds making books sombrely placed as old hats. The enormous soap operas visualized on gigantic TV sets are an assassination of the word power that defines the story and repulsively give credit to the glorified opulence of the paraphernalia.

People regarding themselves as voracious book readers are aware of how every personification of a character or a thing beholds the inner depth of the story to make it feel alive and breathing. The book enacts a story peddled generously on a rail tarmac, a hoot here and there, going under the black tunnel of bereavement to be precipitously overshadowed by the luminous sunlight of plausible enlightenment or a trajectory of denial. The words…..cornucopia of reasoning or barrier describe the vulnerability that leashes the true emotion hidden behind one’s conscious.  This is the magic of books; but what we are proffering today is a limited online brain edition that’s sells 10,000 million copies of ennui and deadpan paradoxes to life.

Being a fervent Ayn Rand fan—an excerpt from her book, “The Fountainhead” talks about how our emotions govern our life and what is it that makes who we are.

“Throughout the centuries there were men who took first steps down new roads armed with nothing but their own vision. Their goals differed, but they had all this is common: that the step was first, the road new, the vision unborrowed, and the response they received—hatred. The greatest creators—the thinkers, the artist, the scientist, the inventors—stood alone against the men of their time.”

Can an intricate expression like above be camouflaged with actors demonstrating the wickedness and chicanery of life. I presume “not.” The depth of a thought is an agglomeration of words which when joined together reveals the absolute truth.

The obnoxious penchants to online media is the flavour of the day, but what we have left behind is a worthy legacy of books that is not only capable of awakening the mind to a philosophical realm but paint a chiaroscuro of objectivity and phantasmagorical.