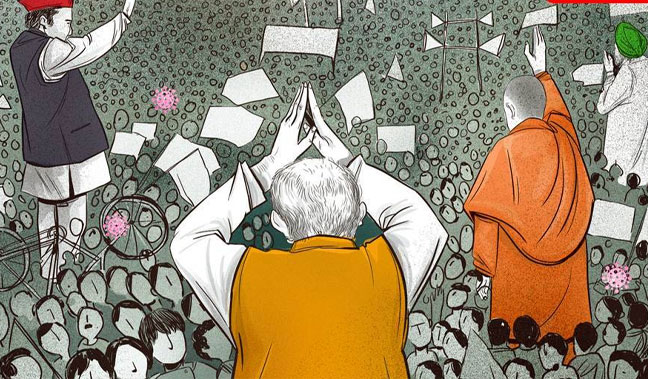 BABRI, BEEF, BLUDGEON AND THE BJP FACTOR IN UP POLLS 2022

BJP had a defining moment in 2017 when Yogi Adityanath took over the reign as the Chief Minister of Uttar Pradesh. The BJP spread out its wings with pomp and pageantry but for some it was a blow across an open wound—the head priest of the Gorakhnath Temple would now adumbrate his spiritual wisdom to millions of people in the most esoteric way. The ambivalence spurred all smoke and mirrors.

Could an ascetic spartanly dressed in a saffron robe be a spokesperson of the ghettoized minority group?

Will politics be now ruled by puritanical gallimaufry of prejudices and polarization?

Is India heading towards a “Hindu Rashtra?”

The answers seemed dubious at that time, but the last 5 years have put BJP in an invidious position of being portrayed as an idiosyncratic party governed by ideological motives and beliefs.

The fisticuffs towards Muslims and Dalits by promulgating a ban on cow slaughter shows the religious intransigence of our self-abnegated Yogi. Isn’t it an aberration to the secular fundamentals that promise to align communities as per their ethos and aspiration? Cow is venerated by Hindus as holy but juxtaposing other communities to follow the gene code is a fury by choice. At present, UP is witnessing the bemused cows jostling to find a refuge; though cowsheds built by Yogi Government fall short to keep the anthropomorphic cow in a safe heaven.

Yogi was never the chief contender for the CM post during 2017 state elections. He was a Machiavellian projection of the RSS and BJP’s hubristic vendetta to put U.P in an ideological framework of “Hindu Rashtra.” Beaming with pride as a protégé of “Mahant Avaidyanath,” Yogi unaware of his capabilities as a political leader fastidiously carved a chiaroscuro of religion and politics. Muslims became unambiguously caught like sugarcane in the gears of the juicer. They were substantiated to pejorative dismissal of self-identity when the U.P population policy incandescently inundated the rise in fertility rates to Muslims with 3.1 in 2015-16 as per the (NFHS-4) survey. Various BJP ministers created a communal angle to term Muslims as loaders of procreation. The policy draft, though a brilliant stratagem to control unwanted bees and buns, cocked a snook at the minority community.

The parallels are many; Yogi and Prime Minister Modi have contemporaneously placed the Muslim community on a rough edge. If Modi created a turbulent tide contorting the peaceful fold of waves – abrogation of article 370 and introducing the Citizenship Amendment Act 2019, both receiving massive opprobrium in disenfrneching the Indian Muslim, Yogi Adityanath too has the tide flowing with communal drops in the ocean.

The state elections 2022 of U.P will decipher if minority rebuke, a manifestation of religious paranoia, is successful enough to gather only Hindu votes or BJP in its aim to exfoliate Muslims is still capable to heap the barn of robust development and substantial foreign investments. Religion has become a purveyor of blandishments and ingratiation in the Yogi hand-holding— whoever flocks to take refuge under the palanquin of “Hindutva” takes a pie of being a nationalist. The rest are a shadow of treachery reflected by their unpardonable invasions, blasphemous casteism and disenchanting mediocrity.

The loudspeakers burling sounds of Muslim invasion by BJP loyalist, and their discreet extrapolation of Muslims furtively settling in India is a favorite rabble rouser. Babri Masjid dispute suffered an inglorious verdict for the Muslims of this country who felt that Hindutva is a torrential downpour of “Indian Oligarchy” and they were left with the least number of threads to spin the web. If the Babri verdict is the rivets that fasten BJP’s frame with “hammer and stroke” is yet to be seen. However, the overall air smugs an odiferous whiff of anti-incumbency and repugnant exculpations.

Who can overlook the perfidy and disorientation of the government during the Covid-19 pandemic? The government did try to cut the carpet to fit the corner stone in handling Covid but failed to deliver. The “pass the buck” melodrama was a pestering insinuation that finally saw corpses afloat in the Ganges or buried at the edges under the sand in the most incongruous way. The self-justifying recriminations were abundant but did less to provide a sheltering carapace e to Yogi Adityanath.

The U.P election seems to be sputum of unbridled controversies, incessant targeting of bête noire prejudices, rabble-rousing to hide one’s own imperfections and a synaptic dysfunction of connecting with people’s voices. We need to bring secularism into the foray where religion is subservient and does not play the “victim’s card.” Yogi has been successful in putting U.P on the map of massive development and people may want him as CM again, but the future should be sans religious dictums shoved down the throat of millions of people who may disregard the entire ideological set-up.