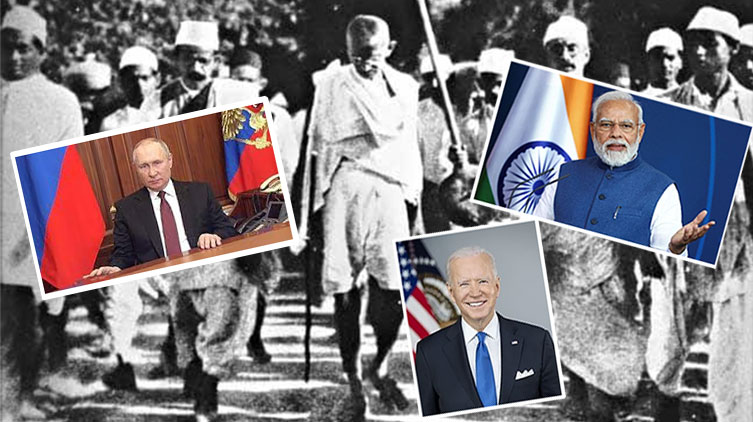 Gandhi is a dejected man today! Ensconced rather frigidly in the firmaments, he perpetually decides to voyage the world encrusted in the nuances of violence and polarization.

Getting hold of Joe Biden (The President of Unites States) is an arduous task, considering the busy man he is but nothing stops Gandhi to barge in. The big ben ‘Biden’ is a volatile clasp that needs softening of its habitual penetration into territories needling their own ideological tapestries. Gandhi unpardonably insipid in his posture walks spartanly with a stick to liberate Biden of his solipsism.

Gandhi ineluctably puts his case, “you seem like a vulnerable frog ready to leap and jump at every sound that senses danger to your mind. Then comes a conspicuous alarm to gather the entire jungle to hear your stentorious cry of survival.”

Gandhi with his imperturbable charm looks straight into his eyes,

“The obligation to be a superpower is to defy unscrupulous activities with a pestering need of human survival and not its concurrence to annihilation. With the current Russian-Ukraine crisis, you have rather behaved irresponsibly in supplying high-end missiles and weaponry to Ukraine to fight a battle of territorial misadventure.”

Gandhi continues, “I adopted the non-cooperation strategy to fight British imperialism but never nibbled with the idea of violence. Your sanctions to impair Russia’s mettle are sure to snuggle the rabbit back to his hole. So, why create a visceral insinuation of impetuous minds. Make non-cooperation your motto and align other countries to follow suit to eradicate the egomaniacal Russian feet. Disparaging a country of its belonging is a formidable weapon rather than storming it with armaments for which it has a massive arsenal to strike back.”

Gandhi propels the stick to a thumping sound and marches ahead to assimilate the fiasco that idiosyncratic minds have created. Muslim identity is a chapter close to Gandhi. India deleteriously plunged into a fissiparous maelstrom of Hindu rajya vs. Islamic nest in 1947. Today, both India and Pakistan rage in search of a true Muslim identity. The extremist attitude has segregated Muslims as ‘some good’ and ‘some bad’; their intentions are impugned by the common man radicalizing them as ‘terrorist’ and ‘war mongers’.

Gandhi feels embittered by the Afghanistan imbroglio and is eager to meet the Taliban supremo, Mawlawi Hibatullah Akhundzada. The Taliban after capturing Afghanistan called for International scrutiny into the legitimacy of a nation insinuating minority oppression, desecration of women and a rigid Islamist pulsation.

Gandhi extrapolates to him the idea of a true Muslim nation –

“A despotic ruler promulgating puritanical Islamist regime is defying his own sacrosanct duty to Allah. Allah has given you an opportunity to take care of people of Afghanistan, and this fortuitous assemblance of events should be used in the most propitious way. The territory should create pastures of equality and not breed iconoclast warfare and terrorism. We don’t intend to create another Ottoman Empire where religion is a torch bed for non-believers. “

The supremo is a man of authority and is in no mood to chisel the fakir for his over the edge discretion; though he realizes that Taliban must wake up to the disgruntled acrimony of watchful eyes.

Putin is definitely the next arm candy Gandhi wants to taste.

Putin finally wakes up to a chiaroscuro of reprisals and renditions. His so called self-justifying exculpation of committing a ‘genocide’ as put forth by Joe Biden has turned out to be a hot potato that the world is reluctant to scald their fingers in. Nevertheless, Gandhi feels responsible to expound to him the true meaning of ‘sovereignty’.

Gandhi’s stick does not tumble at the profligacy of Putin’s imagination; he walks with an indissoluble spirit as he did for the ‘Dandi March’ to abolish the salt tax imposed by the British.

Putin too has transpired a casus belli of solipsistic insecurities. Gandhi expounds,

“You are chasing leaves in a storm and this tumultuous storm would make you clutch your own wound.”

Putin disembarks from the disorientation of his imperfect peccadillos to hear the Mahatma.

“Sovereignty is giving freedom to people to decide where they want to accede to. Invading Ukraine is an act of blasphemy where people are being bedeviled to a futile existence. Let the people of country decide their future. A true ruler’s sovereignty lies in accepting the beliefs of the people rather than coercing them to follow an invidious path.”

Gandhi is no masquerade; he has the royalty of his words firmly etched with his convictions and is not here to offer blandishments. Putin, however, is a mask of chicanery but will never never blow his trumpet in front of the Mahatma and his sanctimonious non-violence strategy.

Gandhi imperceptibly nods and gestures towards his final destination—India; a country being tempered by Hindu fundamentalist. He knows Modi is a tough nut to crack but a wailing sigh to every corrigendum is not a solution. Gandhi unperturbed by the ingratiating pleasantries of Modi fastidiously unbuckles the idea of nationalism.

“A nation as diverse as ours need not be separated by nationalistic ethos. Ideology is a perception of human mind and imposing idiosyncratic views on sections of people whose ideology we don’t believe in is a massacre of nationalism. Nationalism takes birth when everyone with their own carapsse of belief moves ahead with a motive to align the nation as one.”

Gandhi is firm, “People blame me for Muslim appeasement but when did I consider them a root rot to be decapitated from the soil. They were a nation too and were just overwhelmed by insecurities. I proffer you to burnish their nationalistic pride and stop the incessant targeting of their habitual confinement in this country.”

He gives his final word to Modi as today he is the guardian of this country and is incumbent to make sure that all religions are treated equally.

“A nation with proclivities to minority condemnation becomes like a hot furnace that nobody would like to inhale the vapors of. I have no regret of being shot by ‘Godse’—a Hindu RSS workman—but if my death too could not reconcile the differences between Hindu-Muslim progeny then the fault lies in creating a cultural gamut that reckons to disparage what the other beholds. Let India be an awakening of opinionated nationalism to other countries to believe that ideological turbulence sows seeds of inveterate nationalism.”

Gandhi finally propels his stick forward to go back to his heavenly abode with an emboldened spirit of foreseeing tranquility in the tumultuous waves that have carried with them his nation orchestrated with quixotic and quirky predispositions.