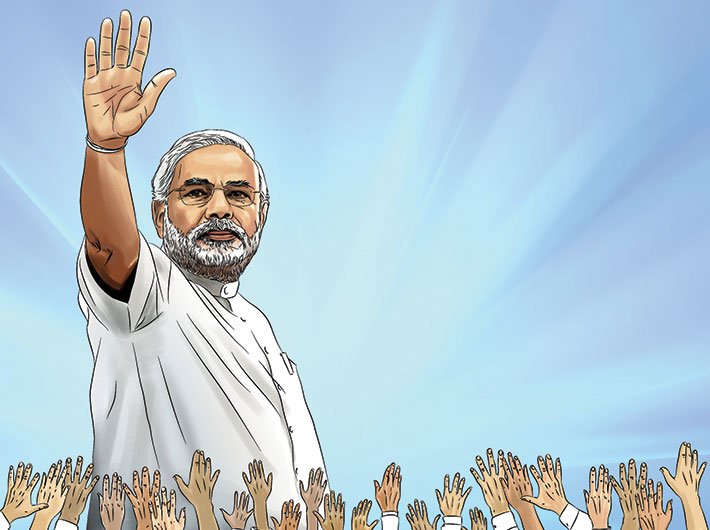 Political Chicanery-Moditva at its Best

Politics seems to be an art to manipulate the minds of the people to be in agreement to the flock of arbitrary pre-dispositions of the politicians. Every now and then, people are made to believe that politicians architect the country to resuscitate peace and harmony; but sometimes their political chicanery goes way down as a stratagem to formulate policies for their own professional gains. Nothing wrong though, but the harbinger here are the citizens of the country who swish and swash to the incoherent tunes of the strategist.

Leaving no perforated pebble crooning down the alley is our honourable Prime Minister, Narendra Modi. He knows how to crawl up the pole and come down at his own free will. He has this uncanny ability to alter the perceptions of the people to the sanctimonious validity of his reforms and vendettas even if it arouses incendiary issues of human trepidations. The last leg amputated was the controversial farm laws. To the consternation of the farmers, the laws leaped like a frog and were invidiously brushed under the carpet for political megalomania and uprising.

The reforms were meant to bolster up the agriculture domain of India and provide a competitive edge to farmers to sell their output at mutually agreed rates, diminishing the value of MSP (Minimum Support Price) scheme. But, all it cascaded was a stentorian protest by the farmers at the U.P and Punjab borders. They were left at the mercy of their presumptions and intoxicating fumes of internal debates. The egregious lakhimpur Kheri case where some farmers were brute to death by a SUV moving over them and the lynching of a farmer by Nihaang Sikhs for blasphemy sets straight the ramifications of undemocratic parlance. The loss of lives and livelihood of these farmers is indisputable and the insensitivity of the government to handle the opprobrium a complete fiasco.

An aficionado among his faithful caucus, Modi turned the tide by repleting the farm laws on the auspicious occasion of Gurpurab 2021 apologizing for his misbegotten assessment—not expected from a person of Modi’s stature. It defined politics as an opportunist mind-set looking for caves to settle the lion in him. Isn’t it a proof of political chicanery where blandishments are used for personal gains?

The past one year, the farmers thinned their boots to the tempestuous heat and vibrating cold but did not let their spirit die. And, today our Prime Minister meretriciously puts an end to the charade. He has used the sharpest tool in the box to create vote banks for the upcoming UP and Punjab polls. The congress and AAP feel denuded as a feeble ant struggling under the load of the matchstick.

Now, that what is real politics—discerning what people yearn for and then serve it in the platter. As the diminishing taste pummels the roasted tongue, another savoury is bought to fill the mouth. Lost in the tang, people are oblivious to the harm it does to their mind and body of multiple cringing of unessential satiety.

Who can forget the promulgation of CAA (Citizenship Amendment Act) which acted as the main casus belli for Muslim agony and the abrogation of article 370? Are we waiting for the Lok Sabha elections of 2024 to put them at rest so that the right-wing politics can continue? The repeal of farm laws or the land acquisition act or any reform for that matter is not a proud moment for the country. The politicians and ministers should be fastidious to bring out laws after introspecting the impact of it. India still finds its flavour among the impoverished, downtrodden, farmers, labourers etc. Their mind-set is to earn without complexities—a simple life with few rebuttals and battle axes. They are too naïve to understand the political gimmicks and leave no chance to vote with an infallible belief in the party.

When policies are formulated keeping in mind vote bank politics, it causes great concern about the defenestration of democratic values. We need not show the world our dysfunctions or our lack of vision. It gives an impression that we make and break laws to suit our idiosyncrasies. The entire episode of farm laws gives Moditva a new theme of playing with the emotions and psyche of the people. Let’s create governance that invites democratic opinions before promulgating a law so that resources and effort don’t become a sinful waste of time.

“Are you a voracious reader, who loves reading and purchasing books?
Do opinions matter to you and you feel you can express your thoughts too?
If all this intrigues you, read the suggestions given by our expert book reviewers and bond
further with www.thebookroom.in.
Find the  book review blogs right here.”

it is very nice