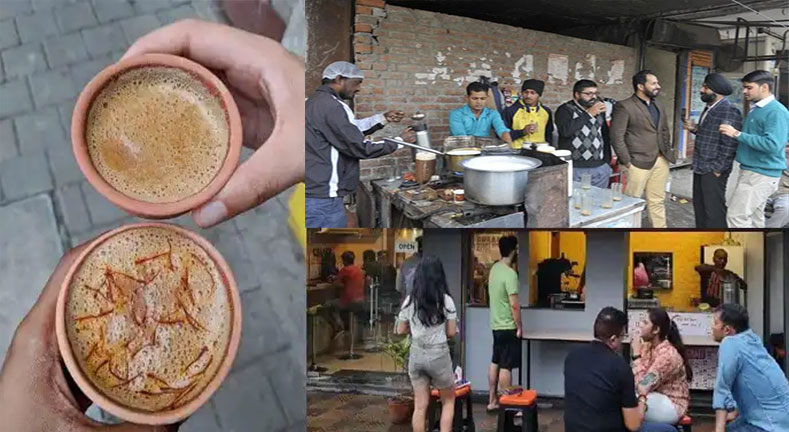 The Quintessential Cup of Chai-Stories and Sentiments

The early morning frost and the mist indulgently eclipse what is usually accessible to the eye. A walk by the lane in the frosty winter months deluges the mind to be cautious of the slippery residues beneath the feet or an obscure turn ahead. The body snuggles in layers of clothes with hands convincingly tugged in the shallow cup of the side pocketeager to crouch the last thread of warmth. A hot drink is perpetually the last eye-candy to soothe the frozen mouth.

I have known this ‘chai-wallah’ since he put a tea-stall right next to my residential society. Cowling his ragged muffler and coughing to the cold crabby winds, he Obstrepously fiddles with the utensils. Adjacent to his boiling pot, awkwardly lie a crate of ‘kulhars’ in which the chai is served. My voice shivering a cracked symphony calls the chai-wallah, “Bahiya ek badiya se chai dena”(give me a perfectly made tea). The term ‘Badiya’ is lose-end terminology which Indians are quire accustomed to. In a discreet parlance, it would mean, tea leaved boiled to perfection with milk added and then simmered slowly to get the ‘kadak’ taste. This entire set-up of having ‘chai’ at the open stall, cold winds biting your mouth and eyes dribbling off the crisp crust of cold is a crème de la crème. The onset of winters—warm-hearted and weedy, a gallimaufry of saccharine mood and crispy gup-shup!

Today, we have chai stalls fashionably constructed as lavish chai cafes providing a smorgasbord of varieties that can trick you to defeat the real purpose of ordering tea, a kind of moistening of palimpsest indulgences. I remember my childhood days when ‘sipping chai’ was a discipline followed by our grandmothers to clear the heavy air of household chores and to avoid the nig-nags of their husbands. Stories around chai are the most scared and reflect the inner voice. Sitting cross-legged, tilting the knee often to secure a comfortable dominance, my grandmother used her entrepreneurial skills to sell her receipes to bunch of women listening to her. Chai in one hand, every sip giving her the power to exaggerate on her cooking skills, made her look somewhat priggish but undeniably, it was the best time of the day. These women found peace nibbling on the feast cooked, more chai ordered as if the words would be inept to fall off the mouth until the brown nectar ascends down the oesophagus.

Tea was introduced in China first. There is a story behind its advent. In 2737 BC, Shen Nung, the Chinese Emperor was sitting beneath a tree. His servant was boiling drinking water when some tea leaves fortuitously fell into water. The concoction found a pleasant taste, well approved by the Nung. The story of tea for Indians starts from the time of Britain invasion of India. It was introduces by the British to obliterate the tea monopoly accredited to the Chinese. We may still regard British imperialism as a cowardly ghost till today but ‘chai’ is in fact palatable residue left behind.

Inferences change but the peculiarity of emotional personification remains the same. The flavour of ‘chai’ for centuries is a defeat to our invidious indulgences which tamper with our intellect to a smorgasbord of cuts and options. The first thing that strikes a person with an incendiary mind conflict is to drink tea. Whether it elevates the ‘Serotonin’ or ‘Dopamine’ is still a mystery but still rebounds the mental strength for the time being. A preferred drink during stressful times—chai infiltrates an infallible energy to keep the body and mind running.

Black tea, Ginger tea, Tulsi tea or panoply of teas is offered at tea cafes today. Their story is profoundly related to weather seasons and how aromatically these flavours can touch the chord with the sentimental rain drops, the rustle of leaves that painstakingly fall off the incumbent branches and the harsh breathing cold winds. The medicinal properties of herbal teas are widely known and during the winter months, it’s the perfect panacea for the nasty cold-coughs.

There is a tea for every season and the concomitant snacks to make the tea-snack love story complete. The indigenous ‘samosas’, ‘kachori’ and pakoras’ stick as a lump in the throat till a sip of ‘chai’ bludgeons them down to flow harmoniously with the bile and acid.And the somewhat atavistic ‘Parle-G’ biscuits dipped in hot tea—a favourite among the kids and adults—is still a tea snack devoured religiously by Indian families.

Every ‘cup of chai’ has a story to tell. The unclaimed defeats in life, the ignominious violation of sanity, the irrevocable past and the ambiguous future, and the destined wall of finale, all are crossed with a cup of chai. Happiness too hops galore resting in the palms that holds the cup emanating an aroma that seems to define our state of mind.

Isn’t tea an incumbent of our whispers, secrets and assails?Every sip is a testament to our prejudiced mind or a mind that wishes to break free of the social clusters that bind us. Our most important decisions in life are driven over a ‘cup of chai’. Finishing the last sip, we hurriedly put the cup on any irrelevant space we feel can accommodate it; decisions taken, we are glad and leave, but the mystic of tea never leaves us.