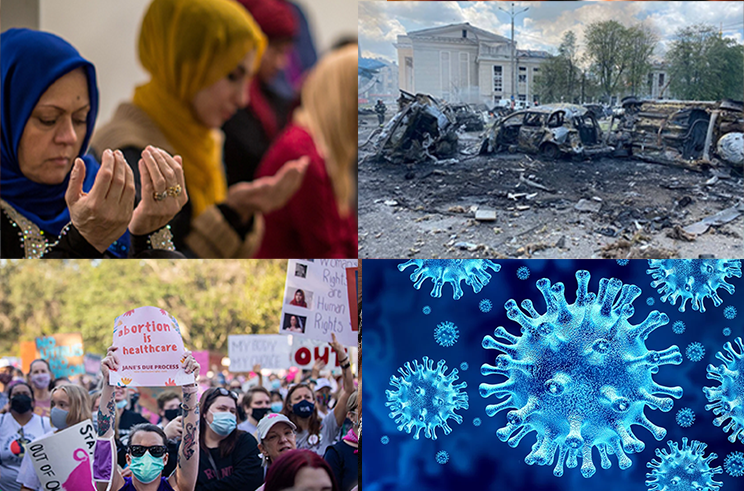 ‘Threatened’ means to be intolerable to any kind of fear, pompously eroding us of our will to live freely. We feel threatened of our past if it obsessively foments a cacophony of irreparable thoughts. Dreams churning the metaphysics of our eroded inhibitions can be distressing. The tumultuous winds invading the silence of our surroundings can be threatening and so can be the wonder-struck dog barking inconsolably. They all and many more incendiaries are a conspicuous validation of a ‘threatening thrombosis’ filling our veins with a deluge of the ‘concomitant fear.’

How the US anti-abortion laws have threatened the very existence of women and their freedom is a story of indissoluble fear and disengagement. The talks of providing more protection to the contraceptive marketsand pledging for safe sex has turned out to be a fundamental paroxysm rather than a personal choice. The stentorian cries of women curtaining the markets and roads begging for their reproductive rights have become a farcical testimony of ‘if womb has become the whimper of male pride.’ Disillusioned they feel, as if a part of them is no longer a probable delight to look at—a casual hook-up could be blatantly fatal and love would have a cost to pay. Fear then becomes a peripatetic traveller to leave no choices but a preferred disposition—evil or angelic—for animperturbable end.

The slapstick rendition of threats promulgated by the United States on Russia for its ratiocinations festered an insurmountable fear of being tricked and trapped.Russia has become a threat for the powerful hegemonies as they stand violated sipping in the fear of their peripheries being a discordant decimation of dispute. Putin seems less threatened inspite of numerous sanctions put head over heels, but his inevitable calumnies to validate his attack on Ukraine seems brandish. Isn’t it a perfidy of life that human foibles are the main reason to percolate fear in humanity; threatened are we by these eccentricities as losing oneself is the biggest fear.

Can we give Muslims a safe harbour for all the fears entrenched in their heart for being called invaders and spoilers? They too feel threatened when the sanctimonious hijab is mocked at for being a bending bone in the body or feather-brained minds responsible for fomenting terrorism subject the entire Muslim community on a ripper’s edge. The Supreme Court judgement on the Babri Masjid dispute cornered the Muslims creating an air of a prejudiced judgement. Not many months have passed, and we have more sugarcane to grind—the Gyanvapi Mosque is under the scanner for its belonging to a Hindu deity Aadi Vishweshwar Mahadev. Doesn’t one feel imprisoned of being prone to validations every now and then? Threatened I am of the comeuppance that bears me down and how the ghost of the past are disinterred to disengage the present.

Instilling fear is the new weapon used by humans to threaten what seems to be a deprecating behaviour. A woman may seep in fear today as her role to be a privileged reproductive carrier has been questioned, or the world that sees tireless buffoons on a conquering expedition. But the master conqueror has been the ubiquitous COVID that has threatened the very existence of human condescension. The pride it attaches to its fear-mongering credentials has left humanity in a rattletrap of seclusion and solipsism.

Have we ever realized why Covid threatens us?

So, is it the fear of death or the suffering that we are scared of?

Suffering indeed! It is an aberration to the very freedom that is a concomitant partner in our description of life. Covid depletes alland we feel threatened as it predisposes us to live a life led by prisoners in the penitentiaries.

In every walk of life, fear governs us because we are short of reasoning of what life encapsulates. Our pride in our existence makes us feel like a conqueror but we fail to introspect the nuances of the past, and make our present a judgemental ghost to prevail over our future. Today, Putin’s fear to lose Ukraine to NATO has worked as a ‘threatened flyer’ culminating into a full-fledged war; wish he had the courage to analyse that fear is a manifestation of a discordant mind that sees an insecure future through the lens of the present, and wishes to keep the wisdom of the past in a basket of prejudices.